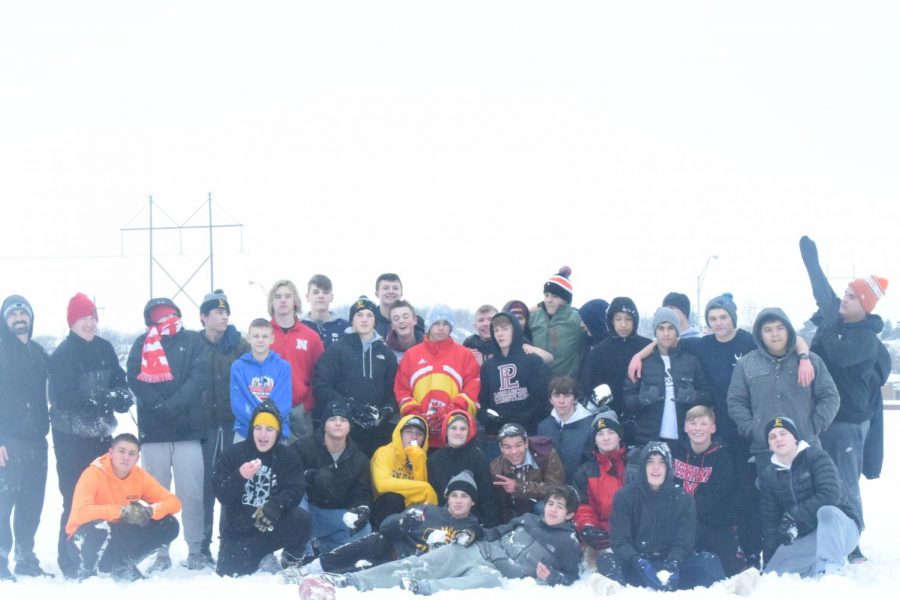 The wrestling team enjoys a fun bonding day in the snow.

When students think of winter, they frequently think of snow days the weather brings. Last school year, PLCS had a total of seven snow days, even though there is only an allotted three days for every school year. Superintendent Dr. Andy Rikli hopes the new two-hour late start policy will help diminish the possibility of excessive snow days.

The biggest inspiration for the change in the district was from other school districts, such as Omaha, Millard and Bellevue. During the previous school year, many schools experienced the same issue of too many snow days that weren’t allotted for. This caused conflict within schools and forced administrators to rethink the way bad weather was handled.

“I think many of us started asking the question ‘is there a better way of handling bad weather forecasts?’,” Rikli said.

Rikli understands parents want to know the night before the cancelled school day so plans can be arranged for the next day, although it may not be the best option. He strongly believes in making the call for a snow day before 5 a.m. that day because of how many unpredictable factors impact the decision.

“The reason why I prefer making the call the day of rather than the night before is we know how quickly snow forecasts can change,” Rikli said.

On a late-start day, the school day would start for teachers at 9:30 before students begin at 10. On Wednesdays, students would begin their day at 10:20 instead. Rikli has concerns about attendance with the late start policy because for some students, they would only be attending for a couple hours before their early release hours. Students may also be called out by concerned parents who do not want their students on the roads.

“I worry a little bit about the number of call outs on late start days and what that does to teachers’ ability to move forward with the curriculum,” Rikli said.

Another option that was discussed was dismissing students early when bad weather was in the forecast. Issues arise when students attending elementary or middle schools may not have access to transportation with early dismissal which could mean students are home alone for long periods of time before their parents arrive. At PLHS, where many students can drive, a lot of drivers are new to the roads and causes concern for Rikli.

“If bad weather is expected, I don’t necessarily want inexperienced teen drivers out on the road in those conditions,” Rikli said.

Even with all the possible benefits, Rikli doesn’t wish the two-hour late start policy had been put into effect earlier, only that last year they had made more morning calls instead of cancelling school the night before. To further prevent repeating last year, the PLSD will analyze the data from the winter months and decide whether the new policy is effective or more useful as a precaution.

“At the end of this school year, we’ll take a look back at the weather, we’ll look at cancellations, we’ll look at late starts, if we use them, and try to put a better plan in place for next year,” Rikli said.

Even though students may hope for more snow days than the scheduled three, the new late-start policy may be quick to extinguish any hope students have for another school year like the last.