Carrying the Spirit Through It All

Monarch band, cheer, and dance teams performed at the Pep Rally Kick Off with the Titans on Saturday, August 21st. 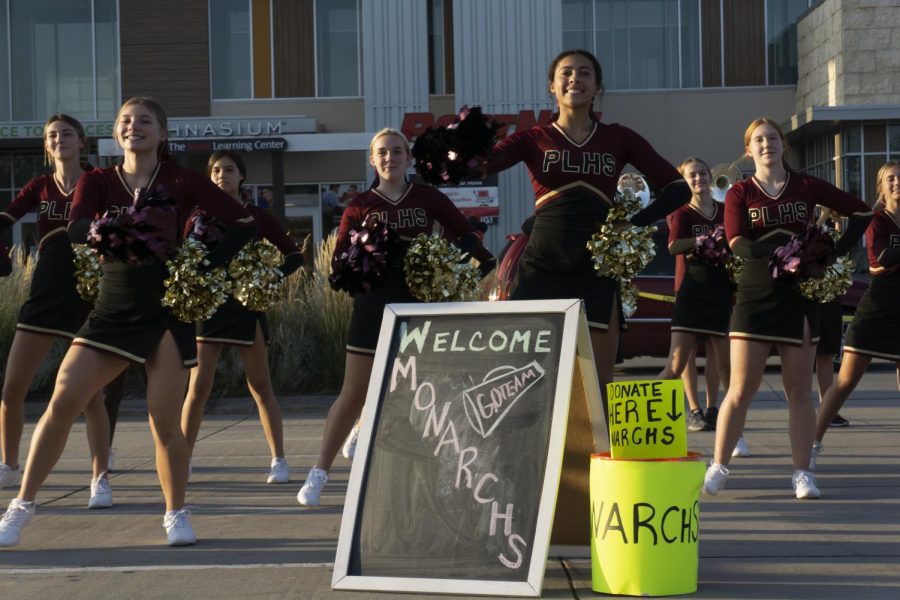 The cheerleading squad performs at the Pep Rally Kick Off on Saturday, August 21st. The band, cheer, and dance teams all performed at the rally with the Titans

Unfortunately, last school year was slightly different as a majority of both schools’ fans weren’t allowed in due to covid restrictions. The energy that quite literally gives the “light” in “Friday Night Lights,” came from the students at home watching the game from a broadcast.

However, as the 2021-2022 school year rolls into full swing, the Monarchs and Titans joined together for the first pep rally of the school year and this rally served as one of the first performances for many since the restrictions were lifted. The rally was held on August 21st, at 7 PM. Band, dance, and cheer members from both schools performed songs and cheers.

“It is so awesome!” junior Meredith Kohler said about being able to be back to performing in front of crowds.

For some new members, this would be their first performance, but there are those who have been involved since freshman year who have missed the excitement of performing.

“I’m really excited for this year because the crowd really hypes up,” Kohler said.

Because these curriculars involve time and availability for almost all performances, some were slightly shocked at the sudden pep rally. Especially when discovering it would not be an in-school rally. “It kinda sprung up,” Kohler said. Band, having had camp and practice over the summer break, already had songs prepared for the pep rally.

“We didn’t need that much time to prepare, but we did need to get people for each section that would be available that night.” Kohler said.

As the pep rally was conjoined with the band, cheer, and dance members from Papillion LaVista South, the pot of school rivalries was stirred as teams were reminded of the upcoming rival game, but also future competitions.

“This year we do compete in sub categories against the Titans at competitions,” cheer captain Kylei Morton said. “I think it was important as a captain to lead the team and rally together.”

This year, members on both teams have better opportunities to improve their skills, enough to move up to higher positions on the team.

“It’s a big responsibility,” Kohler said, who was appointed a drum major for the band. “But as a junior that’s going to be my role next year because I will be a senior.”

Both the graduating 2020 seniors and 2021 seniors did not have the most luck when it came to attending events due to restrictions, but though covid still lingers in the air, it for sure isn’t going to stop this year’s seniors from making the most of everything. Whether at pep rallies or the big rival football game, Papio’s students are carrying the spirit stick through it all.